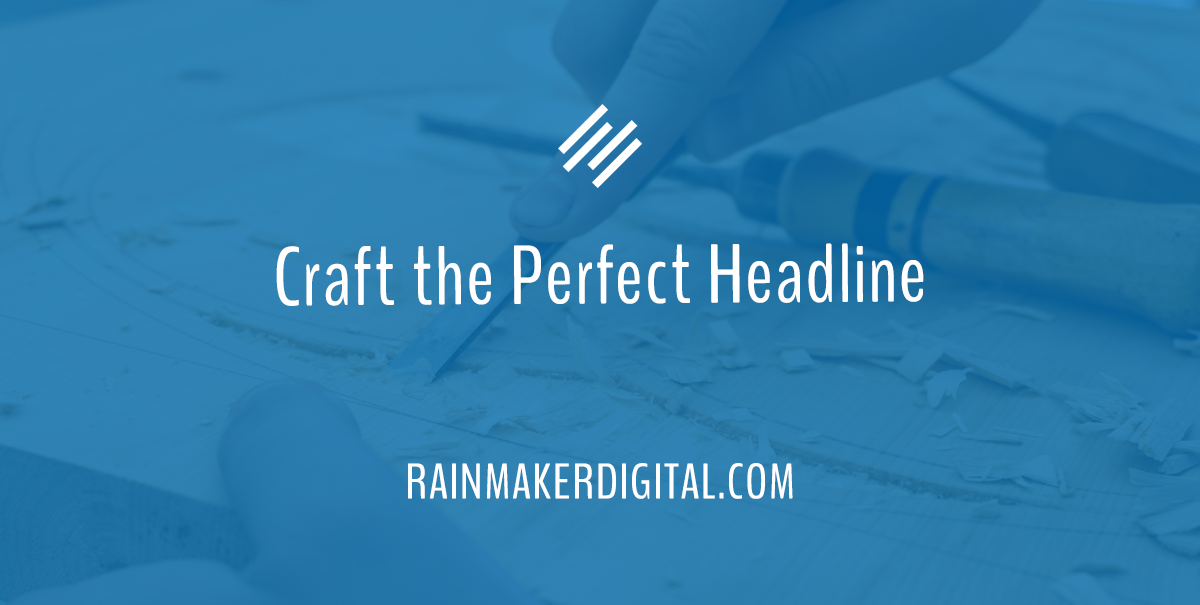 “On the average, five times as many people read the headline as read the body copy. When you have written your headline, you have spent eighty cents out of your dollar.”

So said the “Father of Advertising,” David Ogilvy.

Ogilvy’s mastery of the written word propelled him to the top of the advertising world. Some of his headlines still capture our attention today.

Take this classic ad for an example: 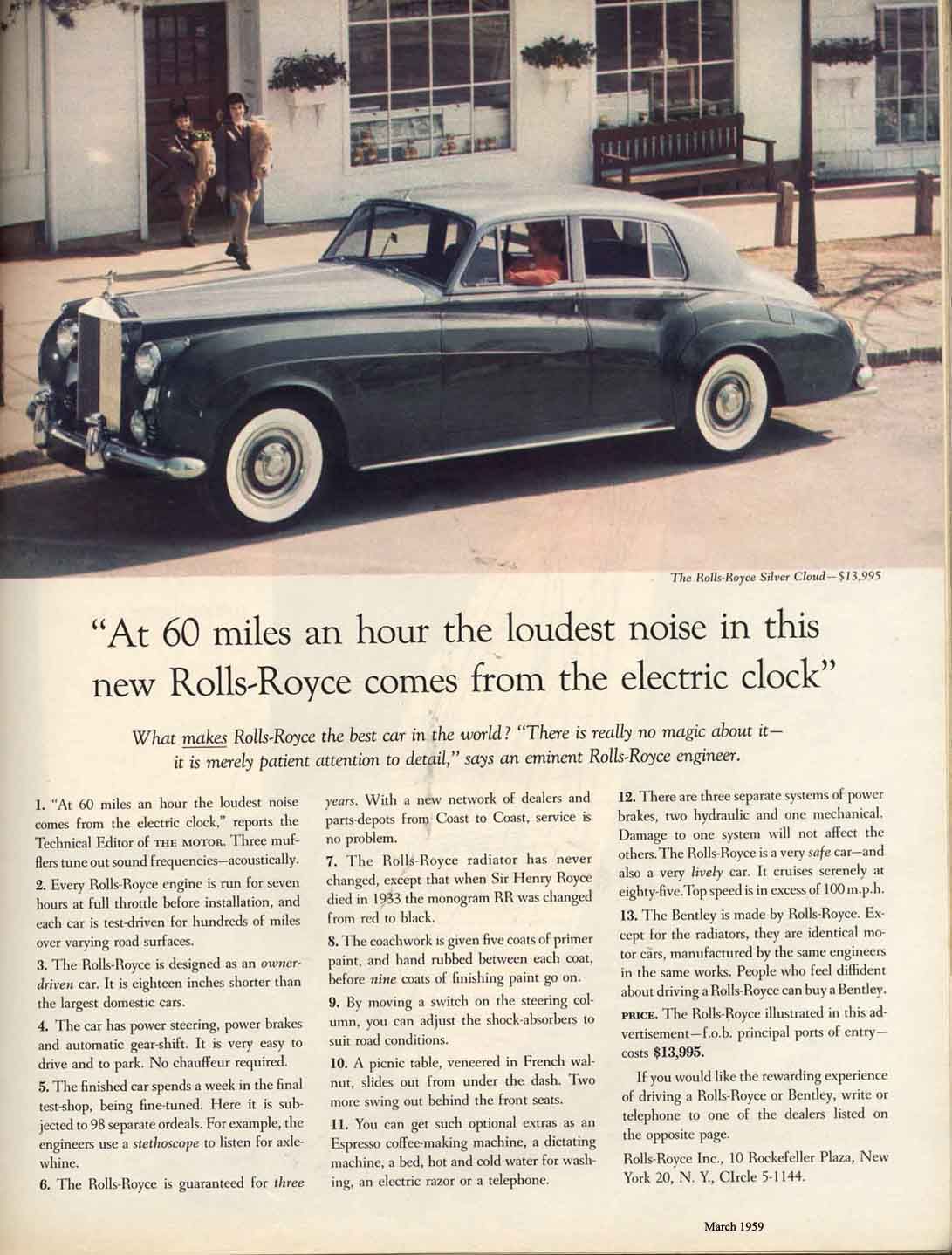 Even if you never read the rest of the ad, Ogilvy’s headline explains the quality and the luxury a Rolls Royce embodies.

I’m working on my headlines constantly. Copywriters are judged by their headlines more than anything else. Headlines sell. Headlines say: “STOP. Pay attention. This is important.” They’re the most important thing to get right.

“But the rest of my content is good. Surely that counts for something.”

Well … no. Not really. One study from 2016 indicated that six out of ten people who shared links on social media never clicked through to the story. Forget about “above the fold”. They didn’t even see the content. There have been a number of studies done across different disciplines on this phenomenon. The numbers vary from around 40% to 70% but the problem is the same in every case: people don’t read if they don’t care about the headline.

You can spend a lifetime learning the nuances of the perfect headline, but we can help you get started even if you’re not planning to become an expert. Here are three tips to help you craft a headline that sells.

Use the Four U’s

Every great headline begins with the four U’s: useful, urgent, unique and ultra-specific.

The number one rule is to keep the customer in mind. The question you need to answer for them is “how does this help ME?” Use concrete language. Think “lessons”, “reasons”, “tips”. Avoid nonspecific benefits like “things”.

The next question your reader asks is “Why should I act?”

Does your headline grab attention and make people want to click through immediately? One of our best-performing headlines from the last few months was “Do Blogs Matter in 2021?” The urgency is right up front. “In 2021” gives you a time frame, and it’s referencing one of the most-used content marketing tactics.

Something surprising or shocking needs to anchor a headline.

“Do Blogs Matter” is shocking because they’ve been a pillar of our success and of the content marketing model. In Ogilvy’s example, “the loudest noise in this new Rolls Royce comes from the electric clock” is a surprising fact.

Be careful of the bait-and-switch. Don’t sell out the effectiveness of your headline for shock value. Think of the ads you see on Twitter or Facebook for those clickbait articles like “10 Celebrity Secrets — #1 Will Shock You.” You click through and it’s a slideshow of paparazzi pictures meant to inflate pageviews. Surprise or shock should always be authentic, and it should serve the purpose of the piece.

“Studies show” is garbage. “A Harvard Business University study showed that 11% of respondents said X” is effective. You obviously don’t have room for that in a headline, but the principle still applies. Use specific statistics. Use specific facts. Avoid rounding, blurring and generalities. Think of Ogilvy’s headline — 60 mph is a specific number that grounds the fact in reality. If he said “When you go fast,” it wouldn’t have nearly the same effect.

Numbers sell. People don’t even care whether they’re true or not (which means you’re responsible for making sure they are). In one study by SEO company Conductor, those headlines got at least 15% better results head to head when compared with even other “good” headlines. Readers are less likely to doubt your credibility when you lead with something that concrete.

These “Four U’s” will help you create headlines that sell.

Most headline articles will lead with this up front. They’ll say “here are 20 headline ideas that work today,” and they’ll be correct.

The problem is that a formula doesn’t last forever.

We’re already in an Ogilvy frame of mind, so let’s reference his list of power words. Some of those come off very wrong to the modern ear. And it’s not because they weren’t effective at the time. It’s because we’re jaded. We’ve heard the same words over and over, and they’ve lost some of their power through familiarity.

One of the best sources of the current headline formulas can be found on this Copyblogger list. These formulas exist for a reason. They work. But you have to understand why the formula works, not just plug words in mindlessly.

One of my favorite hobbies is collectible card gaming. In card games like Magic the Gathering or Hearthstone, there’s a listing of the most popular card decks and strategies, and everything revolves around it. This is the “meta”. Either you run the “meta” or you build a deck designed to oppose it. The “meta” is made up of tried and tested strategies. They work. It’s the end result of a lot of people testing a lot of different strategies and choosing the ones that work best.

Eventually the meta crowds everything else out until the game format becomes stale. That’s when you see one of two things happen: either the card game company weakens the dominant strategy to allow space for other ideas, or someone finds a card or strategy that “breaks” the meta.

The same thing happens with headlines. You have thousands of people testing headlines to try to find what works. Eventually this becomes a “meta” — you only see headlines that work, and they all look the same. But eventually, people grow tired of the formula and migrate to the next new, spicy thing that catches their eye. Headlines tend to go in cycles.

Keep your ear to the ground and constantly measure what works. Don’t rely on formulas blindly. Use the four U’s of headline writing, no matter whether you have a formula or not.

Be Aware of Headline Portability

Your headline itself doesn’t have to be portable. But your idea does.

Your headline will change based on where you’re using it. You may shorten it for the subject line of your email or leave the longer form for the page itself. The idea has to work no matter where you use it. If you can’t shorten it without losing the whole idea, it’s not a good headline.

Email and Google SEO have different best practices for headline length, so you have to be able to get it into those contexts. There are a few things to keep in mind.

How long is the page title of your article or post? Yoast has a good benchmark. Width matters, not just character length — you may be a character or two different depending on the composition of your headline. You should be between 47 and 68 characters as a general rule. That includes the name of your site itself and any other extras that go in the page title.

Headlines also have to work in emails. Mailchimp recommends 9 words and 60 characters as a maximum. Again, that includes anything else in your subject line.

Don’t go too short. Yoast’s benchmark has a minimum for a reason. If you go too short on your headline, it’s as bad as going too long. Consider everywhere your headline will be used, and make sure that the idea is portable enough to stand up to every situation.

Grab Attention With Your Headline

Use your headline to make sure people actually engage with your great content. You’ll see the difference. Need a hand working out your content strategy? Know that you don’t need to go it alone. We’re in this with you. If you need a little help, just drop us a line, anytime.